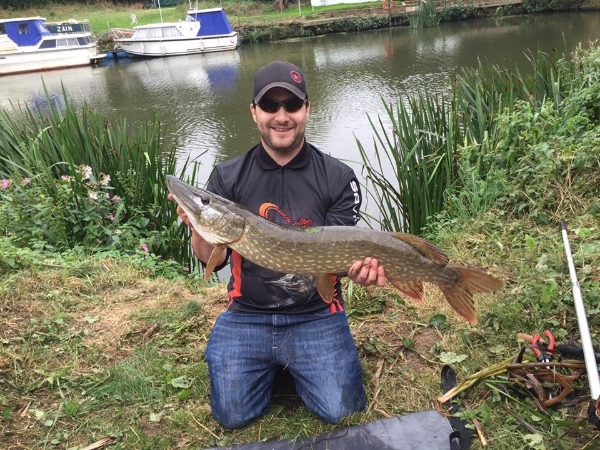 We have had reason to suspend an angler from all club waters following a serious breach of Byelaw 1.6.3 You must not leave a rod and line with its bait or hook in the water, such that you are unable to take sufficient control of the rod.

The angler in question was ‘off his rods’ and this resulted in a Carp hooking itself, taking line and becoming tangled with another one of his lines. The club has lost enough fish through environmental issues without members carelessness contributing in this manner.

The Lure Anglers Association at Barming

New member Bruce Sammels took a few day ticket guests from the Lure Anglers Society for a roving day on The Medway at Barming recently in search of Pike and Perch and the fishing was hard. However, they all caught, even a few small Chub were hungry enough to take some small crank baits. They also had some tiny Perch on 1″ soft plastic lures and ultralight gear!

Pike, however, were smashing the new Savage Gear Line Thru Roach lure all day and LAS South East Chapter organiser Adam Gale was rewarded with a nice double figure Pike late in the day from the car park area.

If you’re interested in joining Bruce and/or the LAS give him a shout on the forum or Facebook page. Roving is certainly a nice way to keep warm during the winter months ahead. Adam stole the show with his double figure Pike late in the day.

This years memorial match was fished by a record fifty anglers on The Medway at Barming. The match was won by club member Adrian Davies with a nice bag of Roach from end upstream peg 71. David Roberts was little over 1lb behind with a double figure net of Chub and Roach from peg 56 and Stewart Cottingham’s hemp caught Roach gave him third place on the day.

The event raised £330.00 for The Heart of Kent Hospice. A big thanks from match secretary Mick Roberts for all those that assisted in the preparation and running of the event.